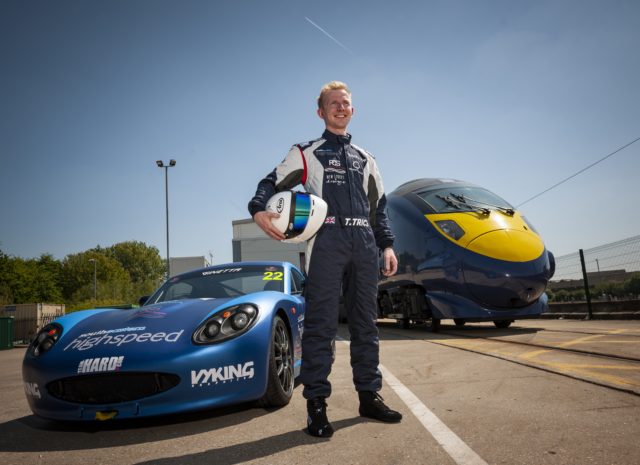 Deal based racing driver, Toby Trice, will be making his motorsport debut this weekend (May 18th) at the Ginetta Racing Drivers Club (GRDC) in Snetterton Park, Norfolk.

The 28-year-old will be realising a dream as he lines up on the grid for his debut season with leading British Touring Car Championship squad, Team HARD. The eight race competition will see Toby transition from a novice racer to a qualified competitor vying for automatic qualification into next year’s G40 Cup Championship, achieved by winning the GRDC series.

Having worked as a high-speed train driver at Southeastern for the last 5 years, the train company will be sponsoring Toby’s races, which he will undertake in a car designed specially to replicate the 140 mph trains he drives on a daily basis.

Toby’s introduction to motorsport began when he started go-carting only 3 years ago as a coping mechanism for the stress caused by a number of failed fertility treatments that he and his fiancé experienced. As a result, Toby and his sponsors will be raising money and awareness for Fertility Network UK, a charity that provides support for couples that have been affected by infertility.

Since then, Toby has gone on to set a number of records and win “Driver’s Driver of the Year” at his local club at Buckmore Park, before being spotted by Team HARD as a rising star on the scene.

Toby said “I’ve always loved life in the fast-lane, so to be racing in the Ginetta championship is an absolute dream. Given I regularly reach speeds of 140 mph from the train driver’s seat, 125 mph behind the wheel should be a breeze. I would like to thank my employers and colleagues at Southeastern for sponsoring this adventure and being so supportive.”